Home page: Link that takes you to the top page.
About page: Here.
Latest Info: Notifications of of the most recent uploaded english translations will be here.
Characters page: Introductions of the characters in the novel series.
Translations page: English translations of each chapter posted accorded to plot order.
Support page: Links to online bookstores where fans can purchase the Japanese novels. International shipping available.
Link page: List of website links that are related to this series. (Anime, game, recommended earl and fairy fansites, etc. I deleted my gallery page and transfered all those illustrations onto my Dearest Fairy facebook page.)

First of all, a little about Hakushaku to Yousei:
The first book was published in March 2004 by Shueisha Cobalt Bunko, and the series was completed with the 32nd book as of March 2013 (including one fanbook.) In June 2007 and March the following year a drama CD was released and a television animation series was broadcasted from October to December 2008. There was also a game released from 5pb in April 2009.
Lastly, there was a manga adaptation published in [The Margaret] comic magazine released from October 2008. Unfortunately the manga version stops at a total of four volumes, covering only the story of novel 1 and 2. The artist for that manga was Ayuko.

Story: (Book 1)
This is a romantic fantasy set in 19th century Victorian England. It follows the adventures of 17-year old Lydia Carlton, a kind-hearted but strong-minded girl aiming to become a fully-fledged [Fairy Doctor] due to her ability to communicate with faeries. Her life takes a 180-degrees turn when she meets the extremely handsome and charismatic Edgar JC Ashenbert, the legendary "Blue Knight Earl" and his group on her way to visit her father in London with her fairy partner Nico. Edgar hires her as his adviser in his quest to obtain a jeweled sword, a family heirloom secretly hidden by one of his ancestors. During this search, Lydia discovers Edgar's true character, unravels the real purpose of his treasure hunt and learns of his dark, tormented past. By spending time with Edgar and getting to know him, Lydia learns how it feels to finally be accepted and needed for her ability and Edgar learns that there is a woman impervious to his charm and does not fear him as a monster but shows compassion.

About the author, Mizue Tani:
A female light-novel writer born on February 3rd in the Mie prefecture (Kinki area.) Blood type O. In 1997 she was the winner of the Shueisha Romantic Honorable Mention Award and released her first book. Her first book was 'Paradise Renaissance' followed by 'Nocturne' and 'Lunatic Shine' (now out of print.) Her other previous works are 'Matenro (Skyscraper) dolls' series, 'Majo no Kekkon' (The Witch's Marriage) series, 'The Lost Kingdom and the God's Arabian Nights: The End of the Wandering Love,' and 'The little lady on the flower blooming hill' series.
Her official site, Gokuraku Garden has shut down as of November 2011.
Click here if you want to see what other works Mizue Tani has written.

About the illustrator, Asako Takaboshi:
A female illustrator in Japan born on January 10th. Blood type A. Her hobbies are playing games, cooking and dieting (although they don't last long.)
Some of the novels she did illustrations for is: "Notebook of the Goddess and Coffin" series, "Tengai Yugi" series, "Summoner Prince Julius" series,  "Lady Marianne" series, "Shinsekai" series and "Zenryosei Ourinkan Gakuen-Romanesque" series, as well as other BL novel illustrations. (Click here for her books.)
She has no official website.

Characteristic:
One of the characteristics of this series is that there is a gemstone that comes out in each book. Each stone has a vital purpose in the story. There are stones that come out in just one book and some that play an important role throughout the series, such as the moonstone on Lydia's ring and the sapphire and ruby on Edgar's sword.
Another characteristic is a fairy or spiritual being's appearance in every story. Just like the gemstones, there are some that appear in one novel and some that continually make an appearance throughout the whole series, such as kelpies, selkies and merrows. 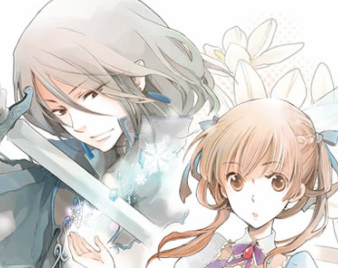 One of my other favorite series Sugar Apple Fairy Tale.
I first became enchanted with Mizue Tani's work by one of her earlier series "The Witch's Marriage" (Majou no Kekkon), and since then I have remained a loyal follower of her writing all the way to her current series.
The reason I made this site is because I noticed that there aren't that many fansites of the novels and although the anime has caught some attention, I wanted to share the point of view and inner feelings of the characters through the novels.
I hope my translations pleases everyone. I've been translating the words pretty much word-for-word, so if it seems to lack detail, I have to say that's just the writting style of the author.

Thanks for visiting, Nalya