A seelie court is a term used in Scottish, Irish, and celtic folklore to indicate a group of the Fey, or faries. They are the Summer Fey, or the Light Fey, depending on which legend you happen to look at. They are the opposite of the Unseelie Court, which is the group Of Dark Fey, or Winter fey.
The Seelie Court is seen as more beneficent toward humans. Seelie means "Blessed" or "Holy" and is akin to German selig and Old English "sælig" - the predecessor of the modern word, "silly" (happy, harmless, beneficial). It is also spelled seleighe - the Irish spelling. They are known to seek help from humans, to warn those who had accidentally offended them, and to return human kindness with favors of their own. Still, a fairy belonging to this court will avenge insults and could be prone to mischief. The most common time of day to see them is twilight. One of the most common type of Seelie Faries are Hobgoblins. Shakespeare's character Puck in A Midsummer Night's Dream is one of the most famous Hobgoblins. While, as part of the Seelie Court, they are most well known by their love of pranks and practical jokes played upon humans. However, they never take the joke too far and can be very kind and generous. Some of the other most common faries of the Seelie Court are the Hobgoblin's Cousin, the Brownie, Ferrishyn, Selkies, and Leprechauns.

Opposite of Seelie Court, they are a group of Dark Fey, or Winter fey. The Unseelie (Unholy or Unblessed) Court consists of the malicious and evilly-inclined fairies. Unlike the Seelie Court, no offense is necessary to bring down their assaults. As a group (or "host"), they appear at night and assault travelers, often carrying them through the air, beating them, and forcing them to commit such acts as shooting elfshot at cattle. Like the fairies of the Seelie Court, neither are the faries of the Unseelie court always evil. However, when forced to choose, they will always prefer to harm—rather than help—humans. Some of the most common characters in the Unseelie Court are Bogies, Bogles, Boggars, Abbylubbers and Buttery spirits. In the French fairy tales of precieuses, fairies are likewise divided into good and evil, but the effect is clearly literary. Many of these literary fairies seem preoccupied with the character of the humans they encounter.

A 'star' spirte that decorates the merrow sword as its star sapphire. It gives off a silver glow. In the beginning, when Arrow first appeared before Lydia, he appeared as a tall young man and was a fairy that served the Blue Knight Countess Gladys Ashenbert. The star that Edgar had etched into the sword after making a deal with the merrows is just newly born, so Arrow is currently in the infant form like a cupid.

A sprite that resides within the moonstone on Lydia's engagement ring. It apparantely is quite happy that it finally is with the Blue Knight Earl's Lady but Lydia refuses to admit she is Edgar's fiancee. When Coblynau appears, the fairy claims that it can speak with Bow, while no one else can, and Bow periodically tells the fairy of Lydia's danger to tell Edgar.
When Lydia loses her memories of Edgar and arrives at the London bridge, Bow transformed into a 'bow' and joins forces with Edgar's 'arrow' to shoot down Prince's unseelie court.

First appearance: Book 5
A fairy that is the caretaker of 'Bow': the white moonstone that was once worn by Gwendolyn. A fairy that is keen with minerals. When Lydia was wearing the moonstone ring, Coblynau would be able to tweak it so only Edgar could remove it. But Edgar isn't able to see the fairy, only hear its voice. 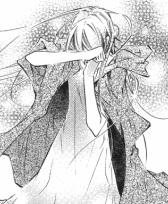 First appearance: Book 7
A fairy that serves prestigious families.
The fairy Paul met served as the Blue Knight Earl family banshee for Gladys. Her tears turn to amber gems, but the amber tea that will not burn foresees that someone from that family will die.
By becoming the replacement, she would be able to evade that family member's death and so she had become the replacement for Edgar by the tear that she herself had foreseen. Right before her fire of life went out, she had handed the key of Ibrazel to Edgar, but the key itself cannot be seen or touched by Edgar nor Lydia. 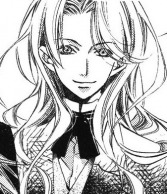 First and only appearance: Book 14
A young man with long ginger hair, who is a half blood fairy of the aurora fairies: Phil Chyris. He is a victim made from the plot to not die out a bride for the 'Prophet'.
He claims to be Lydia's older brother, but his real sister is also a half-blood fairy, who was suppose to be the one to be exchanged with Lydia in the changeling practice between the McKeels and the Phil Chyris. Because Aurora refused to exchange her daughter and escaped with her the changeling ritual was unsuccessful, and Brian's sister who didn't suit the air of the fairy world, died at the young age of 5 years old.
As a half blood living in the Otherworld, his sister who shared his blood was his only haven, and so he was slightly abhorrent towards Lydia who was the cause of his sister's death. So he wished that she would at least fulfill her role as the bride for the "Prophet", approached Edgar while collaborating with Patrick and planned to use Lydia, but after witnessing the two's personalities and strength in their bond, reluctance to sacrifice them started to build up in him.
When Edgar busted into the Hold Land, the Phil Chyris sensed Prince's blood within him and was about to attack him along with Lydia, but Brian sacrificed himself by guarding them and dies in Lydia's arms.

Fairies of the Aurorae, the glow in the polar skies. They are said to be the ancestors of the McKeels, Lydia's mother's hometown. Normally they do not harm humans, but after sensing the blood of Prince within Edgar they fired their blades at him in caution and ended up harming Lydia. In order to heal her, she needed to rest a long time in the lands that the McKeels owned where the magic of fairies couldn't enter; or to drink a trickle of water that flows out of the spring-which bestowed magic to the Phil Chyris-located somewhere in the "Islands of the Master". 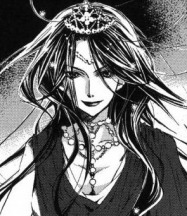 First appearance: Book 19
The Royal Princess of the Ancient Sea Kingdom that sank to the bottom of the sea a thousand and several hundred years ago. Because her mother was a fairy, she was a princess that was feared as a witch; and although she had a fiance decided by a holy priest, she ignored him and lived a free life with many lovers. But she was betrayed by one of them, and the key of the dam that protected the city was stolen, and after she received the ring from her fiance - who was the only one who tried to save her - she sank to the depths of the sea.
She continues to live in the bottom of the sea, still carrying her hatred of all men, while being attended by mermaids and creating a paradise for women, and is a princess of the legend that is still be talked about onland. Currently, she is taking women, who haved suffered from their husband's cruelty into her kingdom, by setting a stage to make it seem as if they had run off and then protecting them by bringing them to one of the island she rules.
She attempted to kill Edgar who came after Lydia who she brought to her island, but she accepted Edgar and Lydia who gave her 'what she most desired', and returned them back safely. At that time she handed Lydia a blank map that leads to the fairy world and gave her the advice that if she locates the red moonstone ring that Ares had once received from her fiance, then it would help protect Edgar's soul. Furthermore, she gave the right to Edgar-through Lydia-to summon her army at any time. 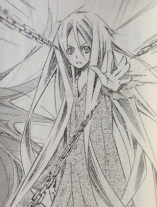 First appearance: Book 25
A fairy who has silver-blue hair and lives in the old rubbles of the mythical Continent Lyonnesse and the last of the shrunken fairies that were once gods and goddesses.
She had made a trade with the Blue Knight Earl from 300 years ago, Julius Ashenbert to tell the one who had the mark of the Ashenbert family and could grant her wish, the path to the Fairylands. 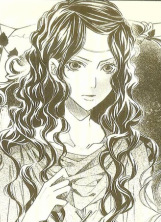 First appearance: Book 27
A warrior merrow fairy that Lydia and Edgar meet when they first arrive to the Fairyland. 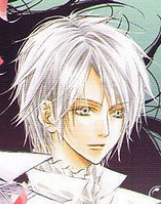 First appearance: Second short story in Book 8: A fairytale of the snow crystal and then in short story in Book 22
Kelpie's brother who makes an appearance in the side story number two in book 8: A fairytale of of the snow crystal and another side story in book number 12: Be careful of cute pets. Unlike Kelpie, who has a pure black waterhorse form, Kelpie's brother is a pure white waterhorse and so is his hair when he transforms into human form.
In the side story in book 8, he makes his appearance as a kelpie in love with a human girl. That human girl, named Ruth (no image drawn) comes to ask Lydia for her help as a fairy doctor about accepting a marriage proposal from this fairy, and this is the first job as a fairy doctor that Lydia does. In the end, Kelpie's brother and Ruth reclaim their love for each other and leave to go to the fairy realm and this is when Kelpie becomes interested in marriage with a human and continues to make advances to Lydia.