Major spoilers! Do not scroll down if you don't want to know the secrets of these characters!

"The Prophet" was someone who was said by the McKeel clan to awaken from his endless sleep to come to aid in the clan's crisis. Leaving an uncertain ancient legend as their messiah, he went into hibernation to store his powers so that he could defeat the "Cursed Prince of Calamity".
Originally, he had the task as protector of the Fairy Doctor that inherited the magical secrets, but due to the discovery of the evil Fairy Doctor's rebellion, he himself became the prophet. This person, said to be inferior to the doctor's power, excelled at one thing and thus could defeat the doctor with that ability.
When the time came for the dead prophet to awaken, there was a bride who had the role to dispense her own life to revive him and restore his power. As a condition of the bride, she required to be under twenty years of age and possess magical ability. And so to not die out of possible brides, the practice of changeling (exchanging human and fairy infants) was continued between the human world of the McKeels and the fairy world of the Phil Chyris (Aurora fairies). When the bride came past the age of twenty and the prophet still hadn't waken or after she fulfilled her role of awakening the prophet and was still alive, the McKeel clan would have her marry the son of the next Clan Chief so that he would take care of the rest of her life as payment for her duty.

A Fairy Doctor of the McKeel clan. Even though he was in the position to safeguard the secret of the Unseelie Court magic, he used that magic to create the "Prince of Calamity," so in a sense, this person is the cause of all the disaster.
The secret magic was the greatest taboo, and the Connacht Royal family of Ireland, the Blue Knight Earldom of Izrabel, and the McKeel clan in the Highlands shared that secret and it was passed down from generation to generation in that family, and the use of it was absolutely forbidden. But while the first two family's descendants died out, the Fairy Doctor in the last remaining family of the McKeel had inherited the secrets of the magic, broke this taboo by rebelling. The rebelled Fairy Doctor was soon executed, but at the same time, that extingushed the last person who could pass on the secret magic.
Due to this, the only one who currently knows of the secret magic is Prince, born from the magic itself. Edgar, who absorbed the memories of Prince, not only is in the position as heir to the Blue Knight Earl but also as the new Prince, who stands in opposition to the three families, and is the sole living person who has inherited the secret magic. 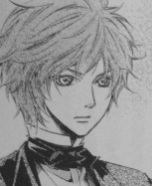 First appearance: Book 21
A reputated violinist in Vienna. A quiet young man with vermillion red hair which he doesn't keep well-groomed as it springs up in certain places. A quiet man who doesn't have remarkable good looks but mysteriously draws the eye of others.
He has a older twin brother, Neil, who looks so exactly like him that it is impossible to tell them apart.
He is the descendant of the Prophet, but since his family moved to the New World from his grandfather's generation, he grew up unrelated to the McKeel clan.
His family was not wealthy, but since Darnell was gifted in music from a young age, he had his older brother support him as his manager, and they cooperated with each other like a three-legged race to make a living by musical performances.
Not long ago, during a sea voyage as they were heading to a musical performance in Europe, the ship the brothers were on came across a sudden storm. In the violent thunderstorm, as soon as they thought they saw an island that shouldn't exist, the ship was wrecked and the brothers were thrown into the sea. And then a mysterious egg came floating up to them, spoke and gave them the option of 'saving the one who drowns the other one into the sea.' Darnell could not decided and was pushed aside by Neil who didn't hesitate to save himself, but the thin branch he had grabbed onto when he was drowning had drifted and got caught onto a boat, he narrowly escaped from death.
To tell the truth, the real identity of the egg was the evil soul of the Fairy Doctor who had created 'the Prince of Calamity', and the branch that Darnell had grabbed onto was the branch of the Holy Great Tree from the Fairyland. Darnell continued his musical performances alone, and was invited by the chief of the McKeel clan to visit the Hebrides Islands and it was there, he became aware of the current situation. When he spoke about how he saw the shape of the Fairyland island during the storm, he was claimed to be the return of the Prophet by Patrick, and he himself didn't have any self-awareness about that,  but from the feelings of wanting to save the lands of his ancestors, he decided to join hands with Patrick.
He stepped in to stop Neil who wanted to resurect the dragon in the Fairyland, and was shot by his pistol, but at that same time, Neil also received a shot in the same place. This was a system that was passed down in the Fairy Doctor twins in the McKeel family, and when one twin came to use the evil power of fairies and committed a mistake, then the good fairy twin was given the task to stop the other (furthermore, the opposite does not work.) He left himself fall into the lake, but was rescued by Kelplie, but because Darnell came face-to-face with death, he awakened as the Prophet, and said that he has learned what it is he must do to Lydia.

The older twin brother of Darnell who looks exactly like him.
He started to learn the violin at the same time as his brother, but since a gap opened up between him and the talented Darnell, he decided to quit and took up the job as his younger brother's manager. As they supported each other, he became to loath living as the shadow of his brother, and was secretly despised  and detested of his brother. Because of that, when the ship they were on was wrecked, and the two brothers were both thrown into the sea, he heard the whisper from the evil Fairy Doctor's soul that had the shape of an egg that he would save just one of them, Neil didn't hesitate at all and immediately chose himself to be the one to save and pushed aside his brother. He figured that Darnell had drowned and died, but he didn't even regret or mourn his death, but was thrilled that he won against his brother for the first time.
He was cleverly deceived by the evil soul that changed its shape to a snake and pretended to be his brother and approached Edgar and Lydia to put them in confusion. He went after the bloodstone that Lydia had swallowed and fired his pistol at Darnell who stepped in to stop him, but at that same time, Neil also got the same injury and fell into a lake and died.  This was because, in the case Darnell was injured, then Neil who was his twin would receive the same injury, which was a mechanism that was passed down in the McKeel family twins, but Neil was not told of this. His corpse contained too much poison, so before it was buried, it needed to be cleansed, so it is currently being mercilessly hanged on one of the trees in the Fairyland. 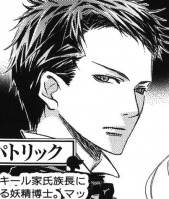 First appearance: Book 13
A Fairy Doctor from the McKeel family, a man with short black hair in his late twenties. Unlike Lydia who is trusted by fairies, Patrick is feared among them for his coldness and so the fairies don't come eager to help him. Even Kelpie does not approach him as he possesss the power to hurt powerful unseelie court fairy like a kelpie.
Patrick comes with Fergus to London from their hometown to try to bring back the only McKeel daughter, Lydia who is qualified to be the next bride for the Prophet and if not, Fergus.
It turns out that he is the younger brother of Aurora, Lydia's mother, so he is Lydia's uncle, but she is unaware of their relationship. He couldn't accept Aurora's action of not fulfilling her role as a Fairy Doctor and eloping, but after revealing his relationship to Professor Carlton and discussing about Aurora, he seems to have come to some sort of understanding of her decision as a young woman and mother in order to save her daughter. 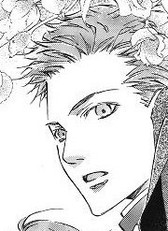 First appearance: Book 13
Son of the current chief of the McKeel clan.
A red-haired man who wears kilt (a short, pleated skirt, esp. a tartan wraparound, as that worn by men in the Scottish Highlands.) In the future he will inherit the cheif's position. After Lydia fulfills her purpose as the bride of the prophet, he was her second fiance who was suppose to take care of her as his wife. His original purpose was to save the Highlands when he approached Lydia, but as he came to know Lydia who was left in the Highlands and became separated with Edgar, he came to seriously love her.
His personality is cheerful and has no sides to his character; he rebelled against Patrick who prioritized the interests of the McKeel, and became to prioritize Lydia's feelings. He confessed his love to her, but after learning of Edgar and Lydia's deep bond, he brought the two of them together even though they had just resolved to separate from each other.